The ace of the Reds pitching staff doesn't pitch the way he's supposed to. He pitches better than that.

Share All sharing options for: Johnny Cueto FIPs the Script

There are few success stories in baseball that can claim to be both as sustained and unexplained as that of Johnny Cueto.  Signed for just $3,500 out of the Dominican Republic in 2004, the current ace of the Cincinnati Reds staff was universally overlooked as a miscast outfielder, and had former scout Johnny Almaraz not coincidentally been in the Domincian Republic during one of Cueto's first converted pitching showcases, there's a very good chance that Johnny would never have been given a shot as a Red, either.   Fortunately, the then-Reds scout (who also was responsible for the Reds signing Adam Dunn, Jason LaRue, and B.J. Ryan, among others) saw enough from Cueto in his lone pitching showcase to take a flier on an 18 year old converted outfielder who, at that point, was no more than an all-arms 5' 10" teenager.

Cueto has been anything but conventional from the day he was discovered, and that's likely why trying to quantify what he's accomplished has been, too.  He entered his April 22, 2014 start against the Pittsburgh Pirates having been worth 0.7 fWAR on the young season, and he promptly threw a 1-run, 3-hit complete game that featured a 0.67 WHIP, and for his efforts he earned .435 WPA.

He exited that start with his season's fWAR having declined by 0.1.

The April 22nd complete game in which he allowed just a single run was 6 days removed from his previous start, which was, similarly, a start in which he threw a complete game against the very same Pittsburgh Pirates.  Following the game on the 22nd, Brayan Pena, Cueto's catcher on the evening, had a quote that put the entire fWAR process into question.

"Johnny was great, he pitched a great game," Reds catcher Brayan Pena said.  "He pitched them differently this time and he had them off balance.  Back-to-back complete games is pretty good.  That doesn't happen too often."

He pitched them differently this time, and he had them off balance.

Tasked with pitching back to back starts against the same team, Cueto chose to attack the Pirates in a different manner the second time he faced them, because they were certainly going to do their video homework after having fanned 12 times in a complete game, 3-hit shutout six days before.  So he threw his slider slightly less, his cut fastball slightly more (and harder), added nearly 2 mph to his fastball average, and he swapped the strikeouts for ground outs as he once again breezed through the Pittsburgh lineup.

And for that, his season became less valuable. 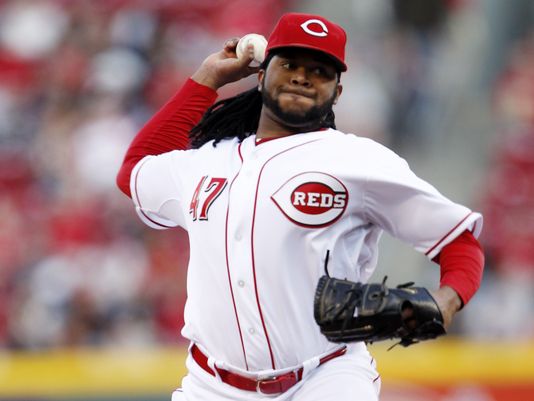 The semi-interesting story behind his fWAR decrease is because the statistic places value on pitchers based largely on FIP, or Fielding Independent Pitching, which more or less attempts to standardize what pitchers' results should look like without the effects of defense and/or bad luck.  Say, for instance, a pitcher had 40 year old Derek Jeter as his SS and Dan Uggla as his 2B; if the pitcher struck out 8 guys per 9 innings and induced a lot of grounders when not striking guys out, he'd allow a lot more hits up the middle (and, eventually, runs) than a guy who had, say, Andrelton Simmons at SS and 28 year old Brandon Phillips at 2B and struck out batters at a similar rate.  FIP attempts to normalize that, and focuses solely on a pitcher's strikeouts, walks, hit batsmen, and dingers allowed, because in theory, those are the things that the pitcher can "control."

So when Cueto first faced the Pirates and struck out 12 of them en route to a complete game, 3 hit, no walk shutout, his game FIP was a tiny 0.43.

Six days later, when Cueto threw a complete game, 3 hit, 4 strikeout, 3 walk game against the Pirates in which he got 15 ground ball outs, his game FIP was 4.20.

There is no context for the fact that Cueto had to navigate through the same pool of hitters two games in a row.  The first time he faced Andrew McCutchen in the second game doesn't count towards how a pitcher fared against a hitter during his fourth time through the lineup, though the change in Cueto's pitch repertoire certainly suggests that's how he operated in the situation.  Similarly, if Cueto were to throw a complete game, 3 hit shutout in Friday's game against the Colorado Rockies, he'd earn no extra credit for having done it against an offense with a team OPS 100 points higher than any other team in the league than he would if he threw it against the league-worst San Diego Padres offense.

FIP and Cueto have never really been on the same page.  In fact, in each of the seven seasons in which he's made starts for the Cincinnati Reds, his FIP has been higher than his actual ERA.  The funny thing, though, is that the closest the two stats have ever been to each other came in the two seasons in which Cueto's ERA was at its worst.  In Cueto's rookie year of 2008, he threw 174 innings for the Reds and sported a lofty 4.81 ERA and 4.90 FIP, and he followed that up with a 2009 season where had a 4.41 ERA and 4.69 FIP over 171.1 innings pitched.  That 2008 season also saw him rank 8th in the National League in K/9, so it wasn't as if he was merely pitching to contact.

A few things changed during the latter part of the 2009 season and the subsequent offseason, however, and their combination has propelled Cueto's success while simultaneously widening the gap between his ERA and the level of success FIP suggests he should have had.

First, the trade that shipped out Edwin Encarnacion and brought Scott Rolen in return took the team's defense to another level from which it has yet to come down.  FanGraphs rated the Reds' team defense as the 23rd best in baseball in 2008, but by the end of 2009, they were ranked 2nd overall.  They've since followed that by ranking 3rd, 3rd, 3rd, and 2nd in total runs saved in the years since 2010, and they've consistently ranked in the top 5 in team UZR during that time, too.  Next, the Reds hired Bryan Price to be their pitching coach in October of 2009, and the improvement in runs allowed seen by every member of the pitching staff - especially Johnny Cueto - has been significant.

The most important change, however, has come in Cueto's pitching arsenal, something that is surely related to having Price on board.  In 2008, Cueto was effectively a two-pitch pitcher, relying heavily on his fastball (61%) and slider (32%), while only mixing in his changeup sparingly (6%).  By 2010, however, he'd started throwing his changup more (10%), had added a cutter (8%), and had slowly begun throwing his fastball and slider significantly less often.  So far in 2014, he's throwing his fastball just 48% of the time, his slider 13% of the time, and he's begun to lean heavily on a mix of cutters and changeups (18% and 16%, respectively).  As a result, he's moved from having just 38% of balls put in play off him be grounders in 2008 to having over 50% of them be grounders since 2010, quite the novel concept in the bandbox that is his home ball park.

What's funny, I guess, is that those evolutionary trends are exactly what FanGraphs writer David Golebiewski began suggesting for Cueto as early as 2008.  Citing his fly-ball tendencies and the ballpark in which he pitched the majority of his games, Golebiewski suggested that Cueto should work on his secondary pitches in order to help limit his HR/FB%, a concept considered both tangible and calculated, and following a 2009 season that didn't see Cueto make much progress in that regard, Golebiewski again checked in, still lauding the talent possessed by the Reds right-hander, but again suggesting that unless he modified his approach, he'd have trouble being able to "take the next step."

Since then, Cueto has done exactly what FanGraphs suggested he do to be better, yet FanGraphs has failed to place value on that.

Follow me back a bit, if you will, to when I mentioned a pitcher having Andrelton Simmons at SS and a younger Brandon Phillips at 2B.  If you were a pitcher pitching in a tiny ballpark, had that defense behind you, and knew that a modified pitching approach would induce more grounders for them to field, wouldn't you make that a priority in your scheme?  Wouldn't you make it a focus to include those kinds of out-making machines as a go-to portion of your repertoire?

Isn't that something you would do everything to try to control?

In Cueto's case, the numbers bear out a consistent pattern of outperforming FIP, and it's largely due to his utilization of his defense - the infield defense, specifically.  Each of Brandon Phillips, Zack Cozart, and Todd Frazier rank in the Top 3 in their positions in runs saved in 2014, and Cueto putting them to work is not happening by accident.  FIP won't tell you that, however, and that's why you won't find Cueto in even the Top 30 in fWAR despite him leading the majors in ERA and innings per start.

No, the player who Baseball Reference has as having earned a half win more than any other pitcher in all of baseball in 2014 doesn't even crack the Top 30 at FanGraphs.  Baseball Reference, of course, derives their Wins Above Replacement system in large part from Runs Allowed per 9 innings rather than runs that could or should have been allowed based upon a certain way of judging how a pitcher pitches.  Once again, it seems the unconventional Cueto has become hard for people to define.

There are aspects of Cueto's game that have fueled the remarkable start to this season that are out of line and will certainly regress.  The .153 BABIP hitters have against him will rise, to be sure, and his near 100% strand rate will absolutely diminish, but these are numbers that will hurt his overall ERA, not change the FIP that defines him.  In his marvelous 2012 season, batters hit .296 on balls in play off him, he stranded just 78.8% of runners, and while his 2.78 ERA ranked 3rd in the NL, his 3.27 FIP didn't even crack the threshold FanGraphs defines as second tier.

FIP has its merits, to be sure.  It can help identify outliers, isolated unsustainable successes, and seasons that buck trends due to luck, but 7 seasons of data is plenty enough to suggest that it does not know what Johnny Cueto is doing.  If anything, FIP should act like a flashlight, simply highlighting anomalies that should prompt further inspection.  As Tom Tango and Bill James both seem to agree on, true pitching value lies somewhere in between what FIP suggests and what Runs Allowed belies, and there's inherent context to each and every statistic that must be researched and accounted for.

Evaluating pitchers is hard.  Evaluating Johnny Cueto is nearly impossible.  If seven years of consistent underestimation isn't enough to change how Cueto is valued, it may be time to simply start calling him really damn good.

*Many thanks to my Red Reporter colleague, Grahamophone, for alerting me to Tango's thoughts on the Bill James article.